Due to sheer lethargy I am putting up an A-Z quiz rather than usual 10 questions.
So, basically you can earn 26 points in this quiz.
Please note that I have tried to traverse different geographies. It starts in the Latin Americas, moves to the orient, then to India and finally to Europe. Read carefully and it should be very easy.

Put your answers as comments. They are being moderated and will be shown after deadline.
Deadline: Sunday 10pm.

A is a musician per excellence who has won many awards for his work in the recent decade. He hails from the South American country B and one if his most distinguishable works is a film called C which contained multiple interconnected stories and a biopic called D based on the life of E, one of the most influential personalities of the 20th century. Incidentally a more comprehensive biopic on E was made by F. The film on E was so long that it was divided and released in two parts. The first part was also known as G which basically means the people from the country B. Now, director H is from another country but he made a film I which is set in B and tells the story of two people from H’s native place. Probably H’s biggest success is the film J which was made just after I. The film J was premiered at Cannes and is considered a masterpiece. It is also noteworthy for its eclectic soundtrack that includes compositions of artists as diverse as Nat King Cole and Gesang Martohartono. It uses a recurring theme music which was originally composed for a Japanese film called K and it was composed by L. Now, L has recently composed for a yet to be released film called M which is based on Thomas Hardy’s Tess but is set in India. M stars N in the leading role who achieved fame while working in a film by director O who was also rumoured to be producing a film called P. Now, P was supposed be directed by Q, and rumoured to star R among others although as of now the production is in a limbo. Now, R recently acted in a home production called S which interestingly used A’s service for the soundtrack. Coming back to M, it also has T as another composer. T is otherwise known for working closely with Q and he achieved nationwide fame with his work in Q’s film U. The film U, in a scene, pays tribute to the author V’s book W, which was adapted to a film of the same name in the 1960s by a well-known new wave director X and starred Y, one of the most endearing sex symbols of her times and also has Z, a veteran director who played himself in that film.

So here are the answers and scores…. 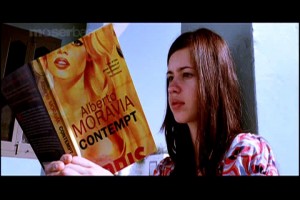